COVID-19 Safety Measures – Your Safety is our Top Priority It was a fitting way for Durni to kick off her senior year at a school that has always been welcoming and accepting of her. The fact that she was also elected by peers that she has been classmates with since 4K made the outcome that much more meaningful. “The students in Bailey’s school are incredible. She is never bullied and everyone knows and loves her,” Durni’s mom, Mary Jo said.

“The students in Bailey’s school are incredible. She is never bullied and everyone knows and loves her.” – Bailey’s mom, Mary Jo

Perhaps none of those students know her or love her as much as Durni’s best friend, Maddie. For some time now, Maddie has been a huge advocate for Durni, taking her to every volleyball team supper, hanging out with her in and outside of school, and always having her back. Maddie joined Durni on the Homecoming Court, which made things even more fun and memorable for Durni. “She was excited to be nominated to the court with her best friend Maddie and have the support and excitement of her friends on the volleyball team,” Mary Jo said.

Volleyball has been one of the ways Durni has bonded with Maddie and many other classmates. She was very close with a group of girls in middle school who all joined the JV volleyball team when they arrived at Platteville High. Although Durni doesn’t play volleyball, Mary Jo asked the coach, who had also been Durni’s special education teacher in 8th grade, if she could be part of the group as the team manager. For four years, Durni was the team manager of the JV and then Varsity volleyball teams, attending every practice, game, and team event, and even earning a Varsity Letter. Durni with her best friend, Maddie

Durni has been the team’s biggest cheerleader and they eagerly welcomed her as part of the team. The team celebrated her friendship and commitment to the team by having her play during the Senior game in September.

Although Durni doesn’t typically play volleyball, she is definitely an athlete in her own right. A Special Olympics Wisconsin athlete since 2012, Durni has been racking up her own athletic achievements in basketball, bowling and athletics as a member of the Platteville Schools Special Olympics agency. 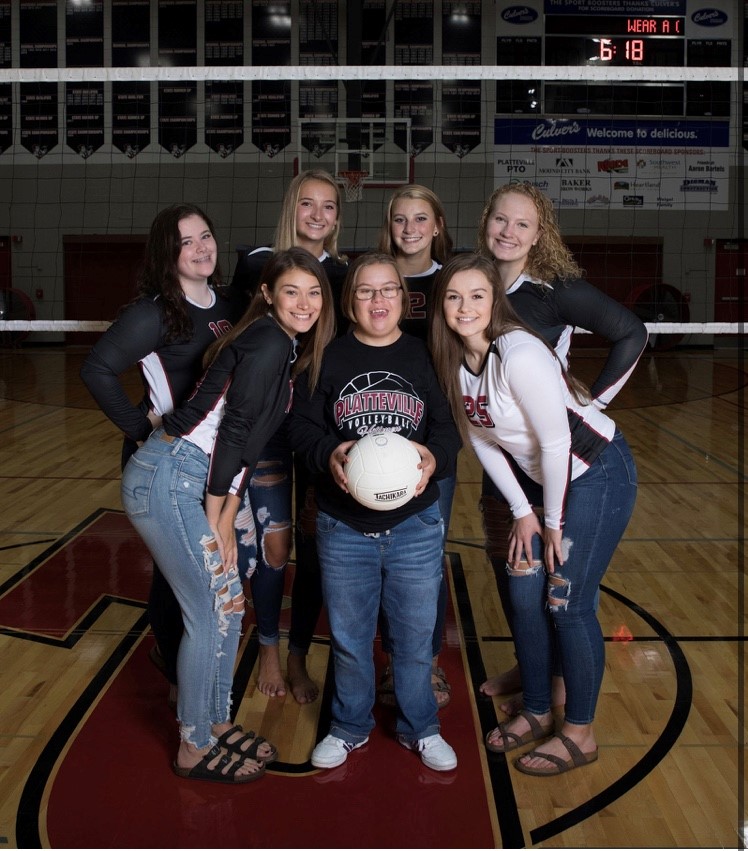 The Special Olympics agency through Platteville Schools is just one of many ways the district has shown its commitment to inclusion and students like Durni. As a Unified Champion School, Mary Jo feels blessed that her daughter is in a school district that cares so much about her. She says she never has to worry about her at school and that she has amazing advocates on her side, including many friends like Maddie and the awesome teachers.

Many of these supporters were on hand to cheer on Durni as she was announced as Homecoming Queen. “That Friday night, standing socially distant from the rest of the homecoming court, Bailey was excited to hear her name announced as Queen,” Mary Jo said. “She was jumping up and down on the field and got to celebrate with her friends and family. Bailey was so happy to be chosen by her peers and recognized in front of so many people.”